Fergus business has developed treatment for AMD that reverses blindness 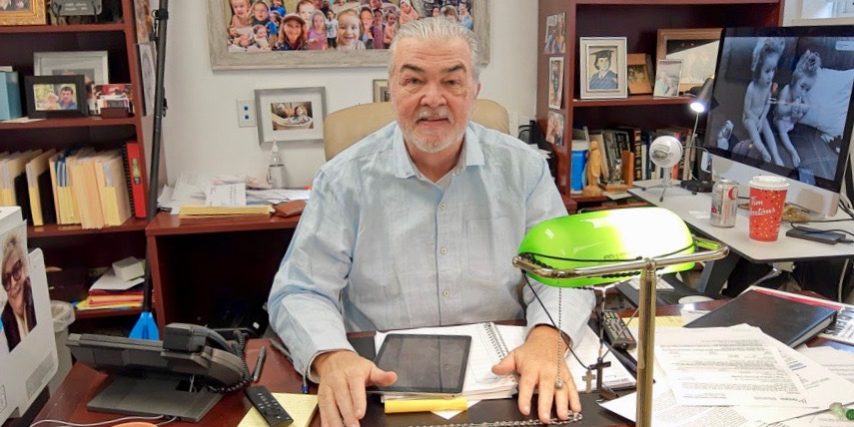 Fergus business has developed treatment for AMD that reverses blindness

The Fergus man, along with his partners at Nova Oculus Canada Manufacturing, have developed a treatment for age-related macular degeneration (AMD) that just might revolutionize the way this common affliction is treated.

Which is to say, if approved, there finally would be a treatment that could reverse blindness caused by AMD, rather than no treatment, which is the current option.

“AMD is a horrible disease,” O’Rourke said in an interview at his St. Andrew Street office in Fergus.

“It strikes around retirement age and robs people of central vision. And there isn’t a cure.

There are two types of AMD – wet and dry. The most common is dry and the more serious is wet.

The macula is the centre part of the retina and it’s responsible for seeing fine details. With dry AMD, the macula gets thinner and clumps of waste byproduct accumulate beneath it.

This causes blurry or fuzzy vision; straight lines may appear wavy; and dark, blurry areas may present in the centre of your vision.

Wet ADM is when new, abnormal blood vessels grow under the retina. These vessels may leak blood or other fluids, causing scarring of the macula.

You lose vision faster with wet AMD than with dry AMD, but neither has a good outcome.

Eventually, people lose their central vision and are unable to read, to watch TV, to drive, to recognize faces and ultimately they may lose their independence.

AMD accounts for 90% of legal blindness.

There is currently no treatment for dry AMD and while laser treatment can help reduce abnormal cells in patients with wet AMD, it is not a cure and only slows advancement of the disease.

What O’Rourke and his team have done is develop a device that emits a pulsing micro-current into the macula, which seems to regenerate macular function in dry AMD patients, O’Rourke said.

The treatment lasts 30 minutes and is given five days in a row with a follow-up treatment every three to six months.

In clinical trials, the improvement was immediate, O’Rourke said. And the patients who took part are now clamouring for follow-up treatments.

“It’s instant. The clients were immediately better,” he said. “There was a significant improvement in vision with the treated clients.

“You lose the benefit after a while. The trial clients all want their next treatments now.”

With two million Canadians affected by AMD, O’Rourke said the Nova Oculus treatment could have far-ranging impacts not only on those who have AMD, but on the healthcare system as a whole.

O’Rourke said the company submitted its proposal to Health Canada in 2021 and hopes to hear in the next 60 days if it’s been approved or not.

Senator Rob Black, who lives in Fergus, has written a letter of support to health minister Jean-Yves Duclos.

“Not only did the trial show significant improvement in the treatment group, but the control group of participants who were treated with a placebo experienced a decline in their vision, which would be expected with a progressive disease like AMD,” Black’s letter states.

Black notes that many seniors are forced to move into long-term care or retirement homes “because AMD has rendered independent living dangerous or outright impossible.

“I am hopeful that Health Canada will give full consideration to Nova Oculus’s promising new device,” he continues.

“This new treatment could be life-changing for the nearly two million Canadians suffering from AMD and I am hopeful that you will take that into account.”

O’Rourke said once the device is approved, he hopes it will become the new standard of care and be covered under provincial health plans so no one has to pay out of pocket.

“Our plan is to make it available to as wide a range as we can,” he said, adding the treatment could be offered in hospitals as an outpatient service.